A Neuropsychological Perspective of Left Hemianopsias

Purpose: Hemianopsia is a form of blindness in one half of the visual field. Hemianopsias are typically right or left and split along the vertical midline of the eye. The most common underlying cause is cerebral vascular accident, infection, brain tumor or some form of trauma, especially involvement in a motor vehicle accident. The term Homonymous is added if the visual loss is bilateral and on the same side of each eye. As the brain is counterlateral for vision the visual loss is opposite to the impaired area. Thus, insult to the right side of the brain or the right visual tract will cause a left fields and vise versa. Homonymous hemianopsias are more common than unilateral hemianopsias. This presentation will compare and contrast a bilateral and unilateral left hemianopsias and the subsequent sequella.

Patient Two: An 80-year-old female who suffered a cerebral vascular accident at the age of 79. She demonstrated a left hemonianopsia in her right eye with the left eye being unencumbered. Her neuropsychological evaluation was significant for global cognitive decline, impairment in attention, deficiency in immediate and recent visual memory, poor visual analysis, color blindness (post CVA only). Her most significant loss was reading as she suffered word blindness (visual anomia) in this realm. Preserved abilities centered on auditory memory, expressive speech and left fine motor ability. The patient denied depression and anxiety and measures were negative. Her premorbid history was significant for a CVA occurring 20 years earlier.

Procedure: Both clients were evaluated on an outpatient basis. Each was evaluated in two four-hour sessions in a cool, quiet room by a licensed neuropsychologist and a certified assistant. Tests were administered and scored according to the publisher’s instructions. Protocols of administration were similar but not identical. No unusual circumstances occurred to contaminate the findings. The Protocols and results were reviewed with each client.

Client one experienced many more visual problems and was unable to complete a number of standardized tests. Her overall level of functioning however was judged to be better than client two.

Discussion: In considering the totality of the test data it should be recognized that the level of impairment of client two is greater than the impairment of client one with the exception of vision. It should also be evident that the array of impaired skills versus preserved skills in explaining overall presentation is more complex than simply noting that left the hemisphere manages right vision and motor abilities and vice versa. Multiple variables have been in play to construct the ultimate sequella. An analysis of vision reveals that client one has more visual impairment than just field deficits. There is clear evidence of color loss in client number two suggesting more occipital involvement than parietal. It is likely that client one had a more localized leason to the anterior parietal and right optic tract while client two experienced a more complex and evolving CVA encompassing a greater volume of tissue which affected more structures and functions. Client one enjoys a better prognosis. The limitations of this study stem from the differences in the ages of the participants and the underlying etiology; TBI vs. CVA. Future research might focus on combining neuropsychological assessment with MRI data. 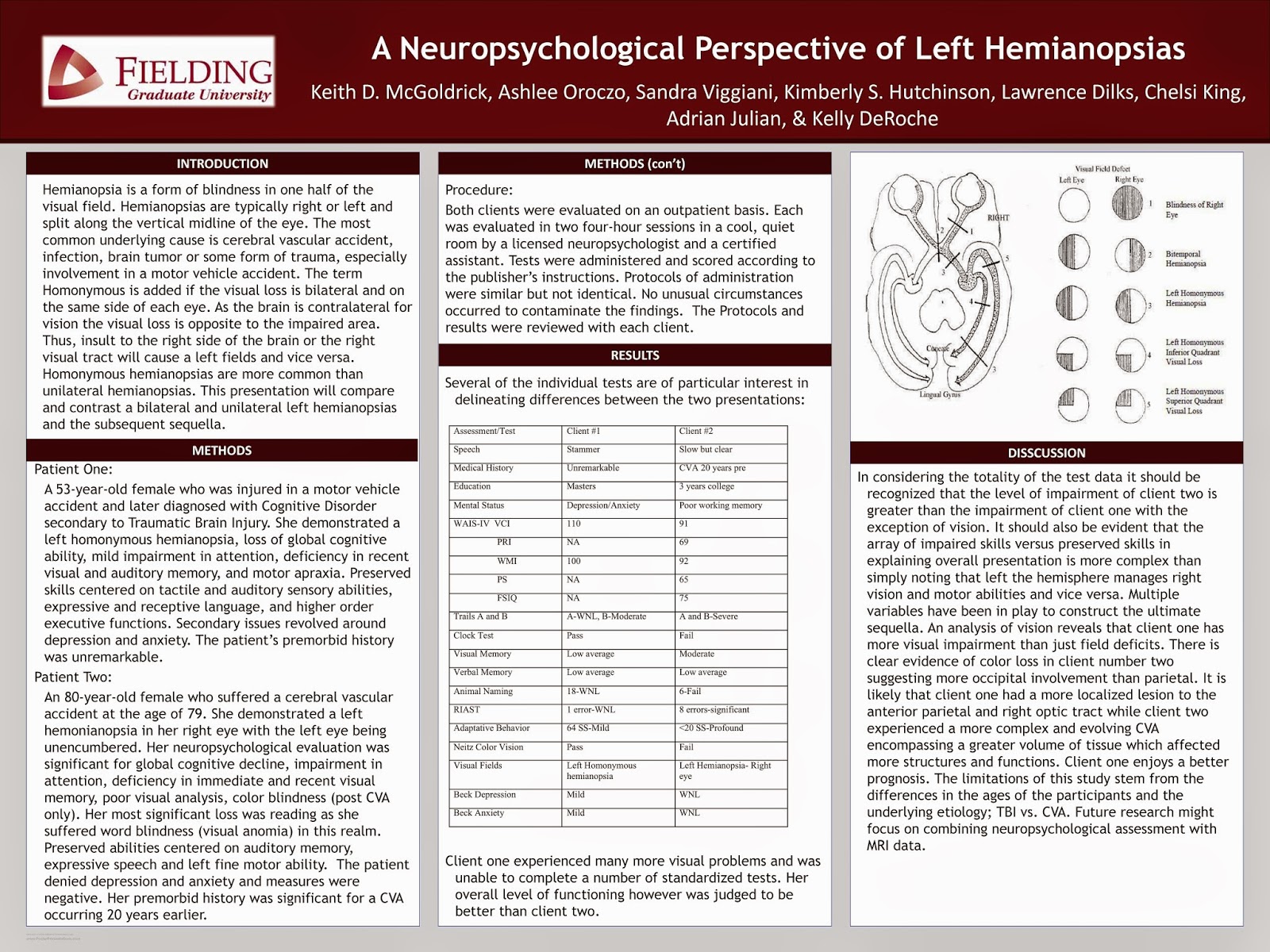