Purpose: The series of guides referred to as The Diagnostic and Statistical Manual of Mental Disorders (DSM) were propagated by the American Psychiatric Association (APA) to facilitate communication among professionals, establish a standard nomenclature and promote research in the behavioral sciences. The first DSM, published in 1951 enjoyed wide acceptance and was followed by four generations of texts. Most of the world, however, for both medical and psychiatric diagnosis, preferred the International Classification of Diseases (ICD) manuals supported by the World Health Organization (WHO) that is in its 10th edition. The DSM-IV/5 and ICD-10 are not harmonious in the realm of mental health and the ICD has been gaining influence with clinicians, government agencies and the insurance industry.

Method: The new DSM-5 has numerous attributes and has functioned admirably since its introduction. Its more notable features include establishing a standard for diagnosis across the United States, enhancing diagnostic communication among different professions, providing a consistent foundation for billing and reimbursement, and integrating biological advancements into the diagnostic schema.

The DSM-5 has not been without its detractors who have pointed out it failed to live up to its promise of a new concise diagnostic model, had large response variances in reliability studies in field trials, was rushed into production for economic reasons, lacked transparency during its construction, was unduly influenced by the pharmaceutical industry, and lacked harmony with ICD-10.

Results: Unlike DSM-5 that addresses only psychiatric-behavioral issues ICD-10 addresses all medical subspecialties in 68,000 diagnostic codes. Only section “F” addresses mental health issues but its F codes were constructed in conjunction with other medical disorders.

The ICD-10 was developed for the same reasons as the DSM-5 but was promoted worldwide by the United Nation’s World Health Organization and has more adherents. Its attributes include coordinating mental health diagnosis with other medical problems, data analysis is cross-cultural and global, the data base is more extensive, there are a greater number of specifiers resulting in more specific diagnosis, and finally it is expandable beyond numeric codes.

Discussion: The most recent edition of the DSM acknowledges the importance of ICD-10 by including the alphanumeric code numbers in the body of the text. In the forward of DSM-5 it acknowledges this is to facilitate the transition from ICD-9 to ICD-10 in October of 2015 for all medical specialties, not just psychiatry.

With the adoption of ICD-10 the underlying value of the DSM-5 may be called into question. If ICD-10 continues to grow in popularity with clinicians, is utilized by the insurance industry and possesses a better, broader research basis, and is accepted as the world standard there might not be an economic or scientific reason to maintain DSM-5. The APA has emphasized the similarities in the two systems but it is the similarities not the differences that may be the DSM-5’s downfall. It will simply be redundant. 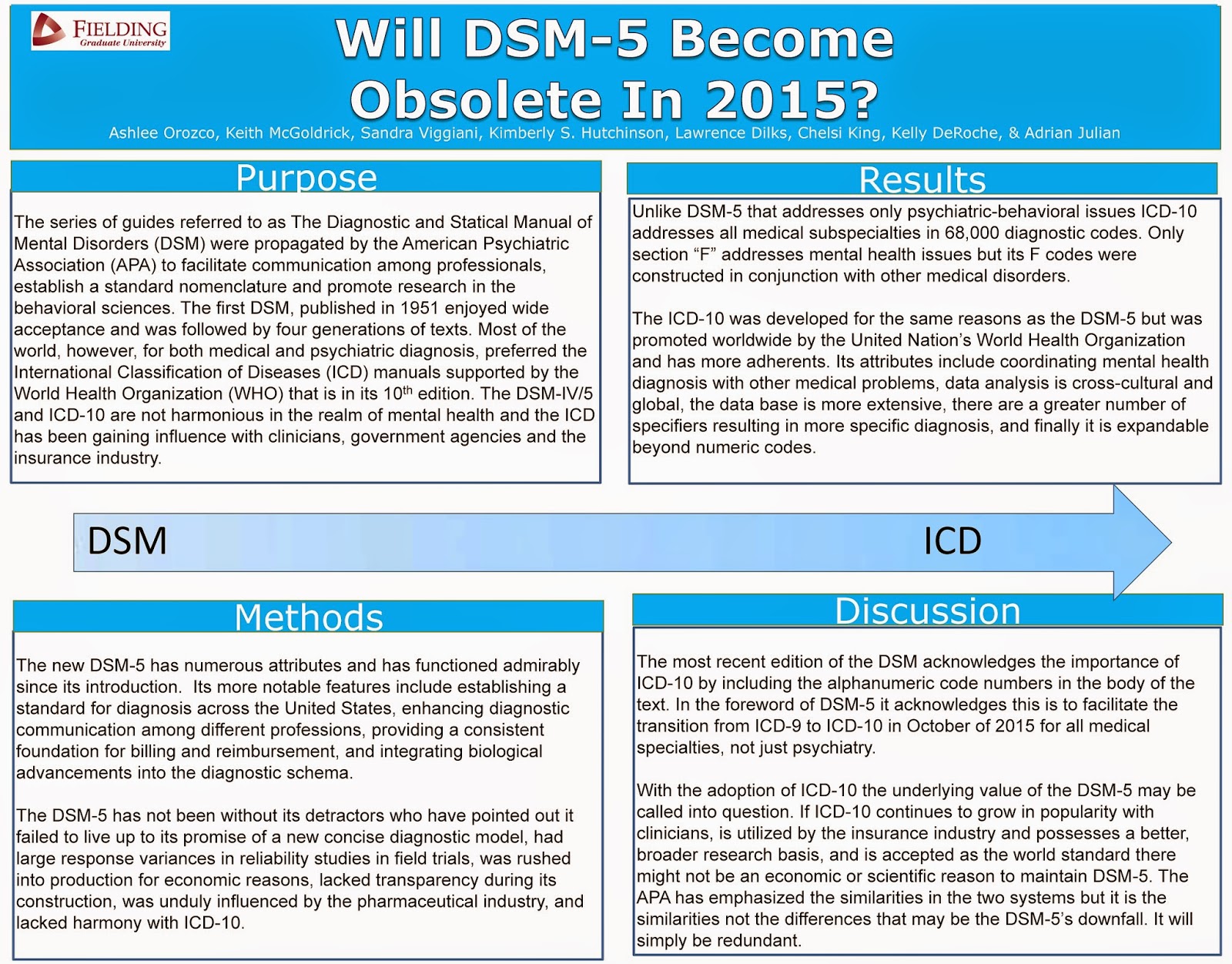 Email ThisBlogThis!Share to TwitterShare to FacebookShare to Pinterest
Categories: Presentations